If your child dreams of a future as an electrician, aeronautical engineer or a graphic or industrial designer, Beaconhills College’s two huge technology centres are a great place to develop their interests and hone their skills.

The College has long recognised the importance of investing in technology programs and the centres, at the Pakenham and Berwick campuses, are testament to this.

Students can get their hands on some state-of–the-art equipment to learn, including 3D printers, laser cutters, arc and oxy welders, lathes, thermomixers, food processors, stand mixers, overlockers and sewing machines. This means they can produce industry-standard work and head into the workforce understanding industry terminology.

Middle School (Years 5-8) students all complete Technology as a subject; the streams are food, systems, textiles and wood. In Years 9 and 10, they can elect any of the four streams for a semester and by VCE, they can follow their passions with a range of choices including Food Studies, Systems Engineering and Product Design and Technology (wood, metal or textiles).

Pakenham Campus Head of Technology, Sally Keys, said students had the opportunity to learn CAD (Computer Aided Design) drawing and many other programs. “This all helps improve the quality of students’ practical work and exposes them to contemporary, industry standard equipment and programs,” she said.

Technology teachers at both campuses have found many ways to make technology subjects fun and engaging.

Head of Technology at the Berwick Campus, Mark Tory, loves watching his students battle it out in Robot Wars – a popular part of Unit 1 in Systems Engineering. The subject gives students a fun way to apply what could otherwise by ‘dry’ engineering concepts and their learning about simple machines.

During the project, the students gained skills researching parts such as motor specs, gears and cranks, learned about project management and testing and construction skills such as soldering, cutting and joining. Mr Tory said this year’s competition was held on 3 August and was eagerly anticipated, with contestants having spread their five week construction timeframe over lockdown periods, building the sense of anticipation.

The big competition day saw students produce a range of clever designs, which incorporated features like spikes and spinning blades aimed at popping balloons on their opponent’s robots.

He said a crowd favourite was a robot with 3D printed parts that raised and lowered four drawbridges. “Each drawbridge was capable of flipping an opponent and popping their balloons,” he said.

“Eventual victory went to two robots with quite simple weapons that were well driven and showed strong team work. There was lots of controversy with umpiring decisions but mainly there was fun and a celebration of learning.”

Going back more than a decade, Beaconhills College has had numerous students who have earned Top Designs or Premier’s Awards for their work in technology subjects. 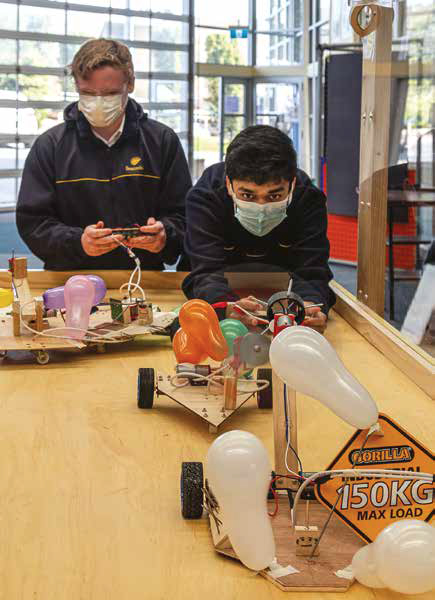 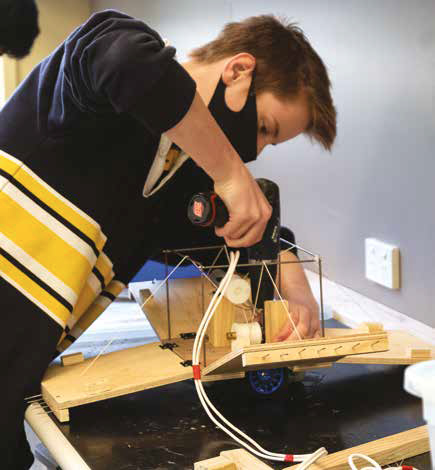